Another one of my favourites in Ayrshire is Dundonald Links which is located near Irvine and was originally known as Southern Gailes.  This Kyle Philip’s-designed golf course was purchased by Loch Lomond Golf Club in early 2003 to provide its global Membership with a traditional links challenge.   The courses name was changed to Dundonald Links to reflect the area’s rich history as Dundonald means ‘Fort Donald’ and fortifications have been discovered nearby dated to between 500 and 200 BC. 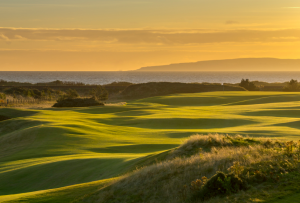 As early as 2008 Dundonald Links was chosen as the venue for the first stage of the European Tour Qualifying School and it continued to host this important tournament until 2011. In 2012, it was the turn of the Seniors to test their skills against Dundonald’s challenges when the course played host to Senior Opening Qualifying. The prestigious Boys Amateur Championship came to Dundonald in 2014, before the course welcomed some of the world’s best female golfers for the Aberdeen Asset Management Ladies Scottish Open in 2015 and 2016.I  t’s a great test of golf with the wind playing a big part in the difficulty factor. It hosted the 2017 Scottish Open and Ladies Scottish Open with broadcasting worldwide. 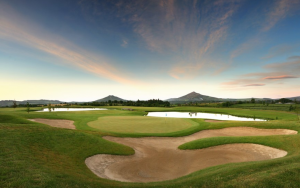 Although the current clubhouse isn’t stunning to look at (it’s a temporary facility) the welcome you receive and the facilities within more than make up for that.  The course meanwhile challenges all aspects of your game and several subtle changes which have been made in the past 2 seasons to some of the greens have made it more playable and my opinion enjoyable.

There are a couple of holes on the course that really stand out for me – the first is the 6th hole – at 170 yards and a Par 3 it’s very tricky with numerous obstacles surrounding the green and a prevailing right to left wind that can be difficult to detect from the sheltered tee.  Tee shots should be played to land on the right half of the green, avoiding the cavernous ditch gathering any shot hit left and taking advantage of the contours to bounce towards the centre of the green.  It’s a great test for your short game!

The other hole that stands out from my perspective is the 18th hole  – it’s the longest hole on the course and almost always a three shot hole.  Playing down the left side of the fairway from the tee will avoid the two bunkers on the right.  An accurate second will ensure you miss the cross bunkers waiting to catch any wayward shots and will set up an approach to a green guarded at the front by an imposing ditch and to the rear by pot bunkers.  Don’t get greedy here, it just might spoil your card!

Dundonald Links is relatively new in Golf Course terms – but making its mark and hosted the 2017 Scottish Open Championship.  It should definately be on your list of Ayrshire Golf Course to play