Whether you are a Nature Lover, an Adventure Seeker, if you’re into History and Heritage or Arts and Culture, if you’re looking for family fun or would like a Taste of the South West – I’m going to make some suggestions for things you might like to do when travelling the SWC 300 from Portpatrick North towards Ayr……enjoy…

Portpatrick – Portpatrick is a seaside town on the western shore of the Rhins of Galloway peninsula.  It’s a pretty town of pastel-coloured houses, set around a small bay with cliffs forming the backdrop. A former port for transportation to and from Northern Ireland, Portpatrick is now a peaceful holiday resort.  Sea angling is a popular pastime in these parts, as is walking, with options including a short stroll along the cliffs to Dunskey Castle. The Southern Upland Way starts here and continues for 212 miles, all the way to the east coast.  For the golfers amongst you there is a beautiful course here – Portpatrick Dunskey – and a lovely clubhouse (open to golfers and visitors alike) where you’ll be made more than welcome if you stop for some refreshments.  Portpatrick also holds a 3 day Folk Festival which takes place in September.

Take the A77 across the headland from Portpatrick to…. 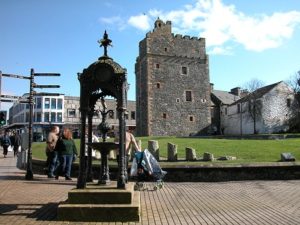 Stranraer – Stranraer is the largest coastal town in Scotland to the South of Ayr.  The town has recently become focused on Marine Leisure and Music.  It’s town centre is dominated by the Castle of St John (an early 16th-century L-plan tower house which was built by the Adairs of Kilhilt c.1510), but with many cafes lining the streets – should you fancy a wee break. It is situated on the shores of Loch Ryan – a sea loch, has a long and level promenade which is ideal for a leisurely stroll and a lesser known fact is it’s home to the first hotel in the world to have its own indoor curling rink.  Stranraer also has a lovely Golf Course (designed by James Braid) – and welcoming club house.

When you leave Stranraer you continue on the A77 in a North Westerly direction and soon come to….. 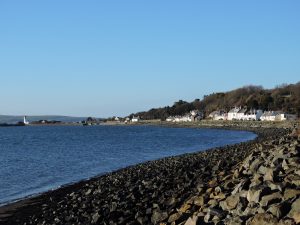 Cairnryan – 6 miles North of Stranraer you’ll find the town of Cairnryan – again on the shores of Loch Ryan.  It’s noted for its large modern ferry port – from here you can take a ferry to Northern Ireland.  The village has a proud maritime history but the modern port dates from the Second World War when it was developed to build the famous floating Mulberry Harbours which were used on the Normandy beaches on D-Day.

The A77 after Cairnryan heads North and inland leading across the headland.  Approx 11 miles on you’ll come across …… Ballantrae – Ballantrae is an attractive coastal village in South Ayrshire – dominated by the ruins of Ardstinchar Castle, once home to the Kennedys of Bargany.  The village offers great fishing opportunities not only in the River Stinchar at the mouth of which Ballantrae is situated, but in the many rivers and lochs nearby. If you fancy stopping for a coffee or a bite to eat – Craigiemains Home and Garden Centre has a coffee shop, gift shop, children’s play area, miniature train, farm shop and Visitor Information Point.

Continuing up the beautiful West Coast you’ll come to the next village of …….. Lendalfoot – 6 miles North of Ballantrae you will find Lendalfoot – a village on the coast located on the curve of Lendalfoot Bay, a sandy beach where you can enjoy stunning views of Arran and Ailsa Craig.  In addition to being close by the designated Special Area of Conservation of the Lendalfoot Hills Complex, the ruined remains of the 15th century Carleton Castle can be found south of the village.  If you fancy stopping for a meal or snack here the Spindrift Bistro is found within Bennane Shore Holiday Park (just South of Lendalfoot) and offers meals, refreshments and home baking. Here you will also find Pebbles Spa and Leisure, where you can book in advance to enjoy relaxing pampering treatments and a fitness suite.

Travelling on North up the coastal road you soon arrive in the town of …….. Girvan – Girvan is situated on the Ayrshire coast, just over 6 miles North of Lendalfoot.  The coastal scenery from Girvan includes the island of Ailsa Craig lying just under 10 miles offshore.  Ailsa Craig is reknowned for blue hone granite which has long been quarried to make curling stones.  The now uninhabited island is formed from the volcanic plug of an extinct volcano and is home to a wide variety of  sea birds including puffins – you can book a boat trip from Girvan to see Ailsa Craig. 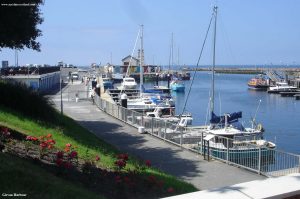 Girvan’s attractions include the Stumpy Tower, originally built as a prison and today displaying fascinating historical exhibits. The McKechnie Institute is also found in Girvan’s town centre.  This is Girvan’s cultural hub, featuring a permanent display of artefacts highlighting the town’s heritage.  It also hosts a regular programme of exhibitions, events and activities. Visit the McKechnie, to see Girvan through time including:

Girvan during the summer is quite a vibrant town with a variety of restaurants, cafés and shops to enjoy and a colourful harbour to visit.

Leaving Girvan take the A77 North for 6 miles before turning left onto the stunning A719 coastal route to Ayr.  This initially takes you past the Trump Turnberry Hotel (set high on the hill on your right) – with the world famous Open Golf Venue of Turnberry (on the left) where one of the most memorable sporting contests of modern times, the 1977 Open Championship saw Tom Watson and Jack Nicklaus, (by many considered two of the best players in the history of golf at that time), battle for the title in front of record-breaking crowds in the infamous ‘duel in the sun’.  If you’d like to organise some outdoor activities while you’re in the area – check out Turnberry Adventures for a variety of options.

Just a short distance along this road (A719) you can take the opportunity to park on the left and walk out to the stunning Turnberry Lighthouse – it offers breathtaking views across the Irish sea to the Isle of Arran and beyond and offers the chance of a light snack – as it’s now been converted to a luxury ‘halfway house’ for golfers and those tourists who would like to visit.  Just along from where you park to go to the Lighthouse you can find Little Turnberry Farm on the right which is a working Farm.   They are open to the public every Saturday and Sunday 10am-4pm, along with their Farm shop where you’ll find home baking, fresh duck and hen eggs from their free range poultry, local cheeses and other local produce, along with a variety of things to stop for a lovely lunch. They also have plenty of animals for you to get up close to………

Further along the A719 you’ll come to the beautiful village of …….

Maidens – has a quaint little harbour traditionally used for fishing and today used for pleasure boats and a long sandy beach with grassy foreshore.  It’s a wonderful place to relax and enjoy breathtaking scenery including views of Ailsa Craig and on a clear day, the Mull of Kintyre.  If you take a stroll along Maidens beach in a northward direction you’ll uncover the pathway which leads into Culzean Country Park leading to Culzean Castle. Maidens beach is a popular destination for watersports, and whilst relaxing at one of the picnic areas it is likely you will spot horse riders galloping along the sand.  Maidens is also home to one of the best fresh fish restaurants in the area – Wildings which is located on the sea shore close to the harbour.  It’s advisable to book in advance for a confirmed reservation. When you leave Maidens and continue along the A719 north towards Ayr you’ll soon reach the entrance to Culzean Castle and Gardens – an amazing National Trust of Scotland Property.   Culzean Castle has a dramatic clifftop setting, Robert Adam architecture, fascinating history and beautiful surroundings and is one of Scotland’s most popular visitor attractions.  It is surrounded by Culzean Country Park, an extensive estate encompassing lush woodland, landscaped gardens and rugged coastline.  This 18th-century Scottish castle couldn’t be better placed for a family day out.  You could easily spend an entire day exploring the country park alone, but with so many treasure-filled rooms to see inside the castle, it’s well worth making time to enjoy both elements of this magnificent historic attraction.

Younger visitors will enjoy discovering the amazing adventure play park – Adventure Cove where they can  climb, swing and explore Archibald the Wicked’s Dungeon, the hidden smugglers’ caves, play in the boats on the beach, climb up the Eisenhower tower and see it all from the height of the viaduct – then see the places for real as they explore Culzean. 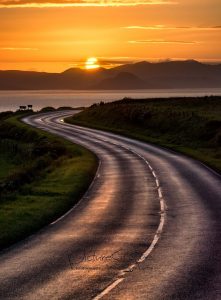 Heading from Culzean towards Ayr – turn left onto the A719 and follow the coast road – you’ll soon come across the ‘Electric Brae’ – where although the road appears to be running uphill, a suitably free-running vehicle will slowly move off from a standstill – an optical illusion where your car looks as if it is going uphill when actually, it is rolling down hill.  (We have a beautiful print of the Electric Brae at sunset in our apartment – The Loft @ The Granary – taken by a wonderful local photographer – Samuel Quinn) 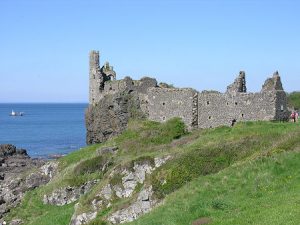 Dunure – Dunure is a small fishing village which dates back to the early 19th century and is home to many places of interest including Dunure Castle where the roasting of Alan Stewert took place. Today this ruin has a picnic area and car park facilities, and nearby is Kennedy Park with a skate park, children’s play area and toilets. 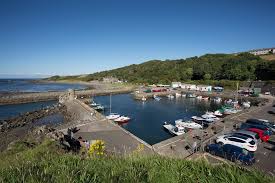 One of the first locations used for Outlander season 3 filming, Dunure was used several times. The best known is the harbour which was transformed in to the port where Jamie and Claire once again meet Jared, and board the Artemis for their journey to Jamaica. However, the beach and castle next to the harbour, were used for the scenes where Claire and Jamie watch young Ian swim out to Silkies’ Island. And the surrounding countryside was also believed to have been used for scenes set near Ardsmuir prison.  Check out more information on the locations used here on Youtube.

After leaving Dunure head back onto the A719 North and the next place you’ll come to is the beautiful county town of Ayr – where its worth planning to spend 3 or 4 days – and in the next blog I’ll let you know just how many things there are to see and do from there…….

Hopefully some of these things have whetted your appetite to come and explore the South West Coastal 300 – in the next blog I’ll have suggestions for things to do while staying in Ayr – I hope you can join me………………and please if you have any feedback I’d love to hear it……..