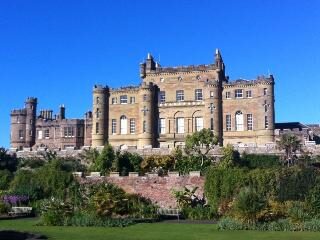 All about The Castle

Come and visit beautiful Culzean Castle (probably my favourite Castle ever…)  It was designed by Robert Adam in the late 18th century and built for the Kennedy family, one of the oldest clans in Scotland, whose ancestry can be traced back to Robert the Bruce.  It’s perched on an Ayrshire Clifftop just 12 miles South of Ayr and exploring the Castle and the Country Park make for a great day out……

This stunning 260 hectare Castle and Estate was once the playground of David Kennedy, the 10th Earl of Cassillis – a man who was keen to impress with his wealth and status and the Castle is filled to the turrets with treasures that tell the stories of the people who lived here – from the imposing entrance hall, which boasts one of the largest collections of British military flintlock pistols in the world, to the elegant rooms and bustling kitchen, all filled with the artefacts of Culzean Castle’s history.  The sweeping Oval Staircase with its soaring colonnades and grand oil paintings, as well as the unique Round Drawing Room, which has panoramic views over the Firth of Clyde are something to behold….

The Country Park surrounding the Castle has something for everyone….it’s opulent to the extreme and is planted with conifers and beech, sculpted around miles of sandy coastline dotted with caves, and finished off with a Swan Pond, an ice house, flamboyant formal gardens and fruit-filled glasshouses.  Here’s more about what you can explore……..

I hope this Blog article lets you see just how special Culzean is to me – and you’ll want to go visit yourself….