All about Dumfries House 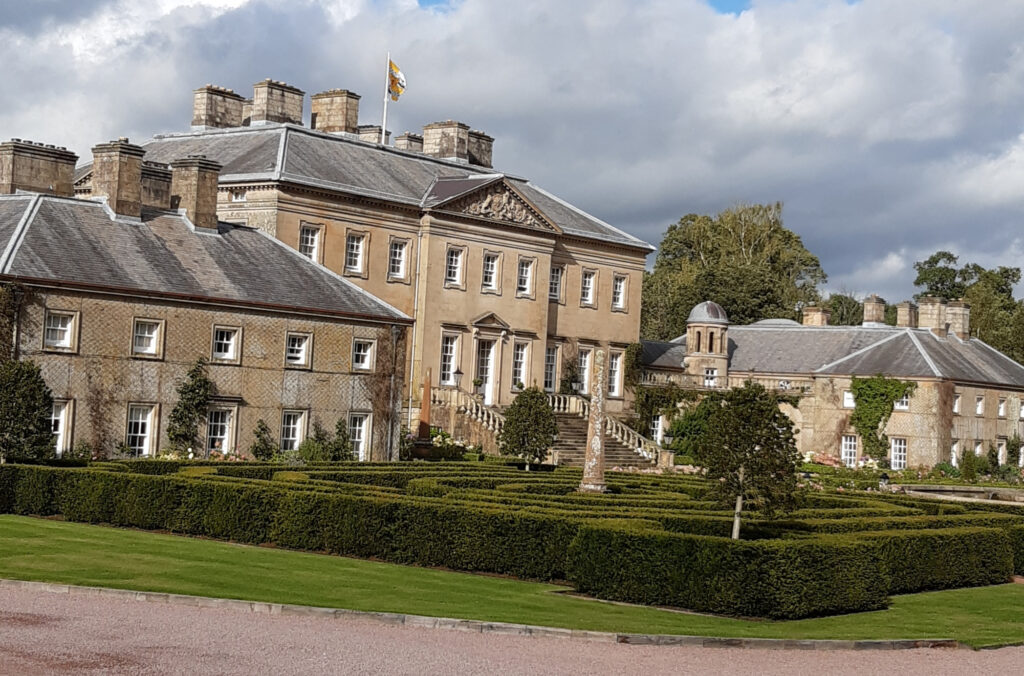 Dumfries House is a beautiful 18th century stately home designed (like Culzean Castle) by Robert Adam. It is set within 200 acres and houses an unrivalled, fully documented collection of rococo furniture by Thomas Chippendale and three 18th Century Scottish cabinetmakers. It is located within a 2000 acre estate, around 2 miles west of Cumnock, East Ayrshire and was built for the 5th Earl of Dumfries in 1759.  It remained a family home from 1760 to 1993 when the last occupant Lady Eileen, Dowager Marchioness of Bute, passed away. The house remained in the hands of the 7th Marquess of Bute who ensured that it was maintained, although not used as a primary residence before it was offered for sale at auction in 2007 when it was saved for the nation by HRH,  Prince Charles, The Duke of Rothesay (as The Prince is known in Scotland) who led a consortium of organisations and individuals in a passionate campaign for its rescue ensuring it was revitalised and has purpose in the community and just so you know – HRH Prince Charles regularly stays at the House – so keep your eyes peeled…….

Under the auspices of The Great Steward of Scotland’s Dumfries House Trust, and since 2018 The Prince’s Foundation, improvements have been made to the grounds and gardens, historic outbuildings have been brought back to use and the estate is a focus for a range of training opportunities for young people and traditional skills and crafts. The transformation of Dumfries House has brought many employment opportunities to the local area, which was greatly affected by the demise of the coal mining industry, and stands as a prime example of heritage-led regeneration.

Dumfries House is available to view on organised tours (which need to be booked in advance) and is well worth seeing.  It contains a variety of beautifully presented rooms – designed with specific roles in mind – some of which are listed below……..

The Gardens and surrounding area

Visitor Centre & Shop. An ideal first port of call on your visit to Dumfries House.  Here, you can pick up a map of the Estate, book your tour of the House and find out what you can get up to on the Estate that day….

Coach House Café. It’s situated in a beautifully converted coach house and stables alongside the Visitor Centre and serves a range of delicious hot and cold refreshments.  It’s a great place to chill for a wee while and has an expansive patio for dining al fresco when the weather permits!!

Woodland Adventure Playground. Situated next to the Coach House Café is the Woodland Adventure Playground, which provides fun for kids (and grown-ups) of all ages.  If you’re not feeling particularly active, you can relax with a cup of coffee as the young ones let off steam. Toddlers can also have a run around in the toddlers’ play area at the front of the Coach House Café. 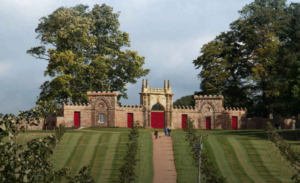 The Temple Gate.  This Category A listed structure was doomed from the start as a day to day part of the Estate, as access from it to the main road was denied by the owner of the interceding land. As it no longer had a ‘practical’ use, it began to be referred to as a Temple and simply became a decorative feature. It has since been used as accommodation and latterly, it fell into disrepair. The stonework and masonry were still pretty much in place and restoration of it was completed in 2016. 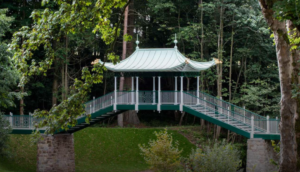 Woodland Walks and The Arboretum. There are magnificent, mature policy woodlands that make the perfect place for a wander – with various bridges including the beautiful Chinese Bridge to help you cross the Lugar Water which meanders through the estate.  The Arboretum hosts more than 500 specimens of trees and a range of shrubs and woodland flowers. To the east of the site are two newly created lochans, which will be a haven for a wide range of wildlife and at the centre of the Arboretum sits the woodland shelter, a magnificent structure created by the students of The Prince’s Foundation. 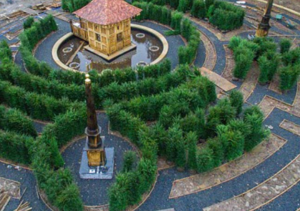 The Maze. Lose yourself at Dumfries House in a whole new way – by surrendering to the yew hedges of the bespoke maze that opened in Summer 2016.  Almost 2000 6ft-high trees were planted during its construction and were mature enough to get lost inside straight away. Over time, the hedges will develop to enhance the labyrinth even more. 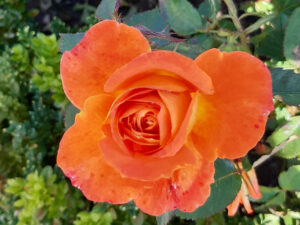 The Queen Elizabeth Walled Gardens. In many ways this is the flagship project of the Dumfries House Estate restoration where extensive work has seen this garden being transformed from a derelict dumping site to a magnificently restored garden with a mixture of terraces, new greenhouses, formal areas and a one and a half acre Education Garden. We just love having a wee stroll around here and interesting Fact 101 – While we were sitting taking in the smell of the beautiful roses in the Walled Garden last September HRH Prince Charles popped by and said “Hello – hope you’re enjoying the garden”……….so be sure to keep an eye open for him……..)

When you feel you have seen enough of Dumfries House and the adjoining gardens then make time to visit these places nearby:

New Cumnock Town Hall which The Dumfries House Trust has rejuvenated   Its much-needed face-lift is spearheading a master plan for heritage-led regeneration in the village that hopes to inspire the local community.

The Tamar Manoukian New Cumnock Pool which was fully refurbished by the Dumfries House Trust in June 2017. This lovely sheltered outdoor swimming pool, opposite the New Cumnock Town Hall, is for the wider community to enjoy.  (There’s nothing quite like having an open air swim in the Scottish rain – we know – we did it!!!)

Hopefully some of these things in my blog have whetted your appetite to visit. Dumfries House and the surrounding area really has something for everyone…..so enjoy…….